Question: This is the first time I feel I am voting party platforms. I have actually come to like Hillary as a politician but I hate bringing the Clinton family back to the White House and she has serious entanglements with foreign governments and businesses. We are long overdue for that revolution we wanted with Obama and the planet needs our attention more than ever. Why not use my vote to support the Green Party?

Response: Regarding Hillary’s “entanglements” with foreign governments, the Clinton Foundation takes donations from anyone and has never been shown to have engaged in bribery. The Clintons also do not draw a salary from the foundation. If I donate to your charity expecting something in return and I don’t receive that and there’s no record that you ever promised something in return, are you guilty of bribery? To me, that’s an easy, “no.”

Well, if you want to maximize your impact, I’d argue that you would want to speak at the bankers conference. You may be getting the same amount of money either way to put toward your own campaign, but you’re also simultaneously taking money from people who might otherwise have spent it on Republicans. Well done, I say.

Remember that the Green Party is still incredibly weak in the US. They hold few positions in local government and zero seats in national government: 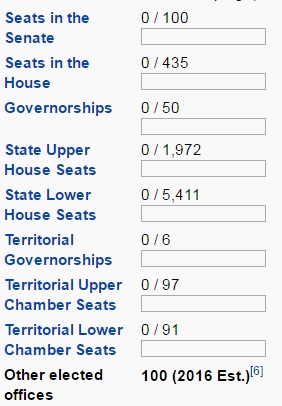 We would probably need decades to get Green candidates sufficient local and congressional support in order to have the necessary impact.

Electoral votes are winner take all. So, if Arizona does go Dem, Hillary gets all the electoral votes and that makes Trump all the less likely to win. Trump deserves an enormous, crushing defeat.

Finally, as someone who always liked Bernie, I’m glad he said this thing that I couldn’t agree with more: