I keep hearing this claim repeated by even usually well-informed people that voter turnout for 2016 was historically low. I think the claim is still prevalent because of a lot of premature reporting immediately following the election.

It also seems attractive to people to accept this and to conclude, “Well, yes, both presidential candidates were very unpopular, so no one voted.” However, as Stanford’s Jon Krosnick has pointed out, high unfavorability often drives more people to the poles.

When I google “2016 voter turnout US president,” the first result I get is a CNN article from Gregory Wallace and Robert Yoon titled “Voter turnout at 20-year low in 2016.” The article goes on to say, “While election officials are still tabulating ballots, the 126 million votes already counted means about 55% of voting age citizens cast ballots this year.”

There’s even a chart that shows just how badly the two candidates did compared to past elections. A little note below the chart, though, says that the numbers are going to change as more votes come in through December (the totals given are from November 10th).

So, what changed? Well, as Mother Jones pointed out on December 15th, this election actually had the third-highest turnout rate out of the past ten elections: 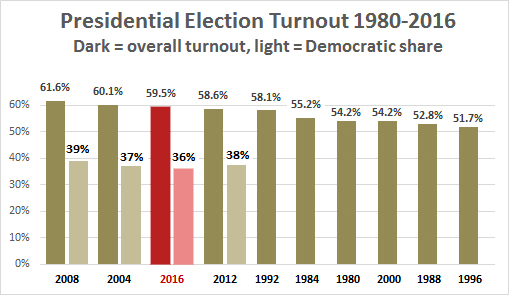 Actually, although this doesn’t change the ranking, this still isn’t accurate as they give a figure for turnout rate of 59.5%; it was actually 59.3%.

Also, at 136,665,420 total votes, this election had the highest total votes for president of any in history. (Perhaps less impressive when you account for normal population growth.)

CNN appears to be talking about total turnout rather than just votes for president. Their figures for total turnout are also wrong, though:

Patrick Scott at The Telegraph wrote the following on November 14th:

[I]t is possible to calculate an estimate of these figures by making projections based on the most recent population figures. This is exactly what Michael McDonald, associate professor at the University of Florida and who runs the US Elections Project website, has done.

He then continues on using these projections that Michael McDonald later corrected. Why continue on? Well, he had to write something, right? Maybe so, but why not update it after the correct information comes out? Why just leave loads of wrong information floating around?