“Hillary denied hundreds of security requests prior to the Benghazi attack.”

False. There are “requests” and “concerns.” We don’t know how many of those requests got elevated to the level of concerns. And, some requested security updates to the compound were made the same year as the attack. Also, here are all of the Bush embassy attacks that you don’t know about because the GOP hasn’t thrown millions of taxpayer dollars into investigating them ad nauseum. Could it be because not one of them involved a Clinton?

“She has taken millions from countries that allow for the abuse of women and gays.”

False. The Clinton Foundation, not Hillary, took that money that might otherwise have gone to oppressing women and gays and then used it to, among other things, help get AIDS medication to millions of people all over the world.

False. About 87% of its expenses go toward services it provides directly. Which is standard for public charities.

“The FBI hasn’t dropped the investigation into The Clinton Foundation.”

Well, if this one turns out like the previous two, what we can expect to find is, at worst, no indictable offense. And, please don’t go asking yourself why the FBI isn’t investigating the Trump Foundation or Trump’s ties to Russia, who we know worked with WikiLeaks to damage Hillary in the polls. It is unnecessary for us to know such things. However, it was always in everyone’s best interest to investigate the minutia of Hillary down to the atom.

“She deleted thousands of emails.”

Sort of true. Number one, she didn’t personally delete them. Number two, “The FBI found no evidence that the emails were deleted deliberately to avoid the subpoena or other requests. Clintonâ€™s team requested for the emails to be deleted months before the subpoena came.”

“She lied about the classification of many emails and was careless with national security.”

“She lied about the cause of Benghazi.”

False. Again from PolitiFact: “There simply is not enough concrete information in the public domain for Rubio or anyone to claim as fact that Clinton did or did not lie to the Benghazi families.”

“She colluded with the DNC to steal the primary.”

Sort of true. Yeah, the DNC was supposed to be impartial, but we also knew that Hillary already had more superdelegates than any Democratic candidate in the past 30 years prior to the start of the primaries. So, uh, impartial? Nah. But, Bernie and every other Democrat knew that going in.

“She colluded with Donna Brazile.”

True. Brazile gave Clinton a single question in advance. I’m sure that made all the difference, eh?

Clinton has praised work already done to secure the border, and she said she supported a 2013 bill that would have invested billions more in border security while creating a path to citizenship for some undocumented immigrants. Her plan calls for protecting the border and targeting deportation to criminals and security threats. Her plan would make it easier for many undocumented immigrants to avoid deportation, but thatâ€™s not the same as ending all enforcement.

“She was complicit in disrupting Trump rallies.”

False. This claim appears to stem from heavily-edited anti-Hillary propaganda videos created by James O’Keefe of Project Veritas. From Wikipedia:

When his videos of ACORN workers allegedly aiding a couple in criminal planning hit the 24-hour cable news cycle, the U.S. Congress quickly voted to freeze funds for the non-profit. The national controversy resulted in the non-profit also losing most private funding before investigations of the videos were conducted. In March 2010, ACORN was close to bankruptcy and had to close or rename most of its offices. Shortly after, the California State Attorney General’s Office and the US Government Accountability Office released their related investigative reports. The Attorney General’s Office found that O’Keefe had misrepresented the actions of ACORN workers and that the workers had not committed illegal actions. A preliminary probe by the GAO found that ACORN had managed its federal funds appropriately. One of the fired ACORN workers sued O’Keefe for invasion of privacy; O’Keefe issued an apology and agreed to pay $100,000 in a settlement.

“She gave weapons to morocco in exchange for money.”

False. The money went to the Clinton Foundation which, as stated previously, used the money for, among other things, helping millions of people get easier access to AIDS medicines. The weapons sales have been going on since before Clinton and Obama and are an attempt to fight terrorists. The Clintons don’t draw a salary from the foundation.

“She was keen on rigging the Palestinian election.”

False: This is an obscure one and rightly so. I think you’re referring to some “leaked” audio where she says of the 2006 Palestinian election, “if we were going to push for an election, then we should have made sure that we did something to determine who was going to win.”

Focus on the word “determine” here. Notice that she doesn’t say that we should’ve tried to influence (aka rig) the election’s outcome; she’s saying that, before we pushed for an election, we should have done more research to try to figure out (aka determine) who was likely to win so as to avoid the victory for Hamas. This is an example of the logical fallacy of equivocation.

“She colluded with the DOJ regarding her investigation.”

False. The “collusion” occurred two months prior to the investigation.

“She prays that shooters are white in order to boost her campaign position.”

I don’t know what she prays about.

“She rigged the primaries against Bernie.”

This may refer to Hillary’s supposed voting machine rigging.
One, if she could rig voting machines, how’d she still lose the general election? Did Trump just rig better?
Two, there’s no actual evidence of rigging.

“This was an anti-establishment election cycle but the DNC chose to go with the ultimate DC insider in Clinton. That backfired on them.”

Yes, Bernie was the ultimate outsider even though he voted with the establishment nearly 100% of the time: 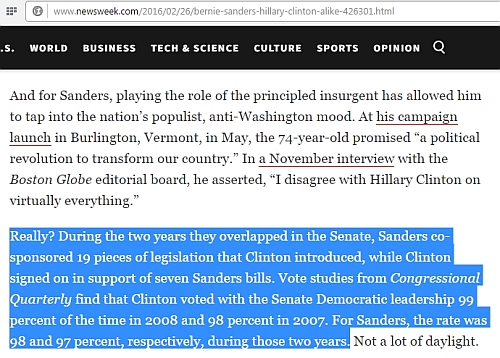 He wasÂ handled with kid gloves throughout the primaries. Â And, I’m sure that the first nonreligious, socialist president would’ve fared great when the GOP stopped supporting him and actually started doing everything they possibly could to destroy him. 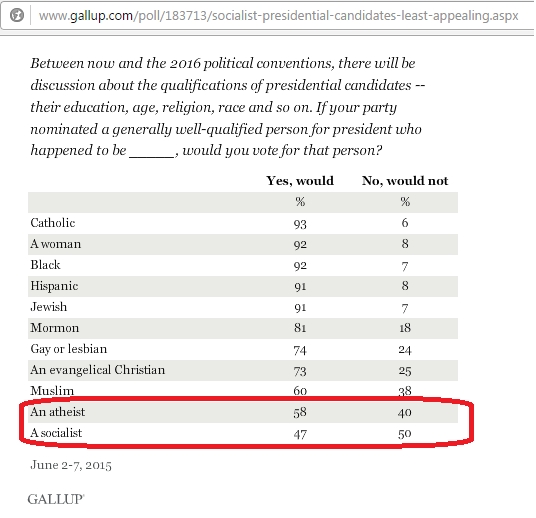 “Clinton has decades of baggage attached to her.”

Sure, like Whitewater, which, like the Benghazi and email investigations, were both designed, not to actually pursue truth but as political tools to negatively impact both Clintons.

And, despite this, before the start of the Democratic primaries, Hillary was one of the most well-known and well-liked politicians in the country: 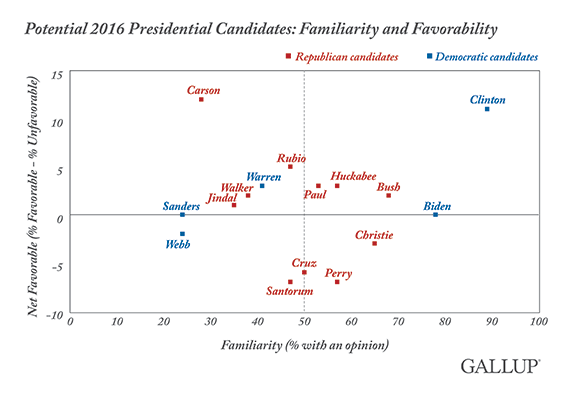 “She made speeches at Goldman Sachs.”

Or, put another way, she took money from rich Republicans that might otherwise have been spent on Republican things like conversion therapy,Â bathroom bills,Â concealing factory farm conditions, and doing anything possible to help degrade the environment.

“She has an ongoing FBI investigation that her and her people thought they could handle.”

An investigation that ended with Comey concluding, unequivocally, that she not only should not have been indicted, but that her case was wildly different from Petraeus’s and that no average American, having done what she did, would have been indicted.

“She had extreme unfavorability numbers.”

The numbers always averaged 10 percentage points more favorable than Trump’s. And, her numbers were dragged down, in no small part, by Bernie supporters: 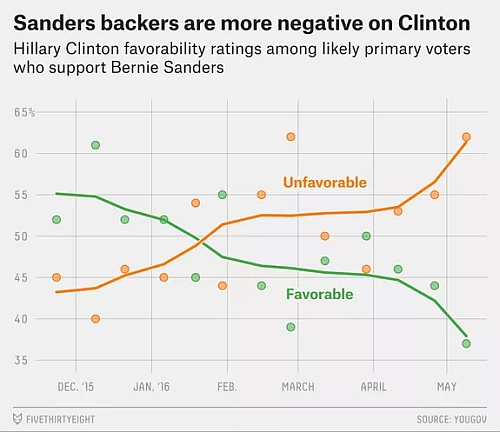 “She let Trump and his campaign dominate media coverage.”

Uhhhh. You can let your opponent do that?

“She also failed to easily explain her policies and how they could benefit working class voters.”

A close family member of mine is a working-class voter. My entire life, their top concern has not been deporting all the “fucking job-stealing spics” (and their “little spic babies”), but eradicating the “cockroaches.” Can you guess why that person voted Trump? I’m sure Bernie could’ve better appealed to that person.

“When she openly condemned Trump supporters throughout the summer/fall, she was further enraging a voting bloc she did not want to turn out in big numbers.”