Today, while watching the first episode of the second season of Californication, I noticed one of the characters refer to several lines of cocaine as “pretty little maids all in a row.”

Naturally, I thought of the Joe Walsh-penned classic “Pretty Maids All in a Row” and, naturally, I then went on a ‘Net hunt for cocaine slang with which I’m unfamiliar. (In fact, this includes all cocaine slang beyond the word “blow.”)

In my hunt, I discovered this: 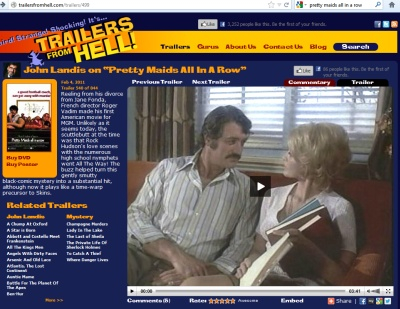 So, anyway, I kept looking around, but, if anybody else has called lines of cocaine “pretty maids in a row,” they sadly either tucked it into some secret place on the ‘Net or, worse, did not even bother to put it on the ‘Net.

Perhaps some wise person will find this post someday and explain the reference in Californication. Maybe there’s a commentary track out there where somebody talks about it. Maybe somebody remembers an interview with Joe Walsh where he touches on this important matter. Maybe it’s the first time cocaine and Joe Walsh have ever been connected. Except, of course, that the album Hotel California was itself based on the often drug-fueled excesses of certain Californians. (And, of course, Walsh has spoken publicly about his past drug addiction.)