The Sean Hannity Show, April 6th, 2010
Sean Hannity: Now comes president Obama who has turned a blind eye to the lessons of history and embraced a dangerous draw-down in America’s defense.

Newt Gingrich: I think this is the most unrealistic diplomacy since the 1920s…. So, you have the President over here in a fantasy…. It just doesn’t fit this particular planet.
[source]

PBS News Hour, April 6, 2010
JEFFREY BROWN: Among other changes, a declaration that the U.S. will neither use nor threaten to use nuclear weapons against non-nuclear countries.

But the U.S. reserves the right to make any adjustment to this policy in the case of biological weapons threats. And the new policy doesn’t apply to any countries out of compliance with the Nuclear Non-Proliferation Treaty, or NPT. 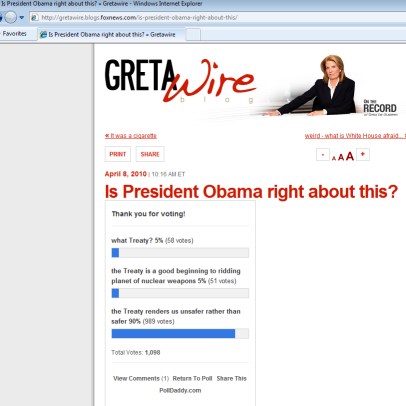 The Sean Hannity Show, April 6th, 2010
Newt Gingrich: If there was a biological attack, which killed over a million Americans, is this president really saying, “We would not retaliate”?

Sean Hannity: It’s what he said.

Gingrich: What is it that we would do?

Gingrich: I agree it’s what he said.
[source]

We live in a troubled world, and the United States and China, as two great nations, share a special responsibility to help reduce the risks of war. We both agree that there can be only one sane policy to preserve our precious civilization in this modern age: A nuclear war cannot be won and must never be fought. And no matter how great the obstacles may seem, we must never stop our efforts to reduce the weapons of war. We must never stop at all until we see the day when nuclear arms have been banished from the face of this Earth.

CNN, April 8th, 2010
The President and his Russian counterpart signing a new arms treaty that calls for both nations to reduce their nuclear warheads by a third.

At the first phase, or the end of the first phase of START, I expect ballistic missile warheads, the most serious threat we face, to be reduced to equal levels, equal ceilings, at least a third below the current levels. To enhance stability, I would ask that no more than half of those warheads be land-based. I hope that these warhead reductions, as well as significant reductions in missiles themselves, could be achieved as rapidly as possible.