“I think you’ve just got to be in a master plan, where there are CC&Rs and they can’t build a mobile home right next door or a nail shop. You know, it’s just strictly a planned community. You’re gonna get your dollars out.”

“I could not have paid for the construction of that house if I hadn’t got the loan-to-value, which means they appraised the house when it was done and loaned me money as what it would sell for.

[Title card: This is the same accounting technique used by Enron.]

“So, I didn’t have to come up with anything for the construction. So, that’s an very ingenious way to get people to continue construction on expensive homes. If that interest rate goes up by the time we move in in April, I might not be able to afford the house anymore. If you look like you make money, I guess eventually you will. You know?”

Las Vegas, Nevada
Robin Leach says that people want to look up to wealthy, not down to poverty.

[Title card: Mark Mumma, Oklahoma City, OK] “…I finally got tired of it and registered ProvidianFinancialSucks.com.

“An actual Providian employee told me all about how they hold checks until the accounts both go late and go over credit fee, generating another $70 per account for Providian. She said some of the checks they hold; some of them they just shred.”

[Title card: The #1 qualification for working at a bank is suggestive selling experience.]

[Title card: Chris and Bob, Minneapolis, MN] [Chris and Bob at restaurant dining table:] “You know our company is called People First Recoveries for a reason, is that, you know, we put people first — we try to be professional with them and we try to be, you know — stand up above, you know — just really treat them fair in what we’re doing. And, you know what? It’s working — it’s gonna get people to work with us.”

[Title card: The largest check cashing chain in the US is funded by Wells Fargo, the 4th largest bank…

[Elizabeth Warren:] “And one of the vice presidents for CitiGroups called me in my academic office and said, ‘I’d like to do a seminar for all of the executives here and would you come in and present your statistics on bankruptcy?’ I had a new book out about bankruptcy. And he said, ‘I think this is going to be very enlightening for people.” And I, ‘Sure!’

In effect, my message was: if you would screen the weakest customers, those who are overloaded on debt and least likely to be able to pay, you could cut your bankruptcy losses by 50% in the blink of an eye.

“Then, a fellow in the back said, ‘Professor Warren…’ And everyone got quiet and, you know, it’s that classic moment when you realize: that’s the guy who has all the power here. And, he said, ‘Very interesting, but if we cut those people off, that’s where we make all of our profits and we won’t make nearly as much money.’ If you cut out the people who are least likely to be able to repay — if you cut out the most marginal borrowers, the ones who are deepest in trouble, then you’re cutting out the heart of our profits because that’s where we make most of our money.”

“I started just, uh, you know, just sort of a garden variety police reporter, you know, working for a daily newspaper here in Virginia. I wanted to writer about why it was so difficult for folks to get out of poverty.”

[Title card: The Browns had a low interest government subsidized mortgage.
…
Cityfinancial replaced it with a longer, higher-interest loan they can’t afford.]

[Mike Hudson:] “You know, after slavery, we went to the sharecropping system and it was really — it was a debt system — a sort of debt slavery where people got caught owing money to the bank, owing money to the landowner, and could never really get out of debt. And, that’s kind of where we are now.”

[Title card: In 2004, thirty states sue the banks for predatory and discriminatory practices.
…
The federal government’s top regulator rushed to the banks’ defense.]

[Title card: In 1999, Trisha and Janne testified for a bill that would have banned credit card companies from college campuses.]

[Suze Orman:] “You hear me say it over and over and over again that one of the most important parts of your entire financial foundation is your FICO score. Your FICO score determines the interest rates that you pay on car loans, credit cards, mortgages… [Title card: (She has a deal with FICO’s parent company.)

“…whether you get a cell phone, whether a landlord will rent to you, many times if an employer will hire you — it has to do with everything.” 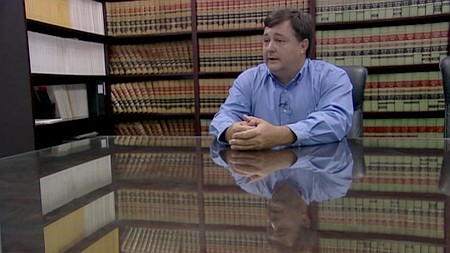 [David the Louisiana lawyer:] “They portray it as being like the Coca Cola formula — that each of their algorithms are akin to the Coca Cola formula. But, in reality, they want to keep it secretive because they don’t want to be attacked on the basis of discrimination or to be shown that there is some defective logic behind it.”

[Title card: One thing we do know is that FICO has nothing to do with your income…
And an inaccuracy rate of over 90 percent.]

[Doris:] “…my loan that I had taken out for my daughter that is deceased, it was supposed to put on there as transferred and forgiven by the government. And someone put in there that I was deceased. So, it was just a real big typographical error.”

[David (blue-shirted lawyer):] “A few years ago, a close friend of mind who’s an in-house council to a sheriff here in a Louisiana parish called me and says, ‘David,’ he says, ‘Equifax has come here to the sheriff’s office and they want to give us a terminal, but we don’t really need one.’ He says, ‘Can we just hook ’em up? They said we can hook ’em up on everybody’s desk.’ And I said, ‘Well, what legitimate business need do you have for a credit reporting terminal there at the sheriff’s office?’ ‘Well, I don’t know — they said we could pull it on suspects and, you know, we could pull a credit report on anybody we want.’ I said, ‘No — that’s not true.’ And I said, ‘Well, what did they ask from you reciprocally?’ ‘Well, they want us to provide information to them.’ ‘About what?’ ‘About everything we do, everything from tax deeds to tax liens to criminal matters — they just want us to report a lot of information back to them.’

[Title card: Between 1994 and 2004 over ten million Americans jumped off the plank and declared bankruptcy…

This year more Americans will go bankrupt than will divorce, graduate from college, or get cancer.] 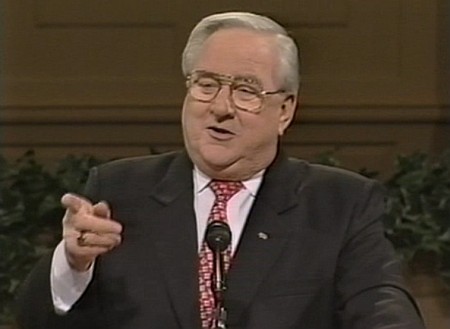 “…I don’t know how in the world I give more to God and have less to keep, I wind up with more — that’s spiritual mathematics.”

[Elizabeth Warren:] You know, this is one of the reasons the credit industry wants to change the bankruptcy bill. Because it is the only, single way that people can stop the collection. They say, ‘That’s it — I’m in bankruptcy. You can have all of my assets, but then it has to stop.’ If you can get rid of those bankruptcy laws, then it never has to stop. You can keep calling those people and collecting from them until they die.

[Title card: Bush endorses a bill that will make it much harder for middle-class Americans to get a second chance. The bill was written by MBNA.]

[Title card: At least one of the bill’s sponsors offers an apology…sort of.]

[Title card: Her grandfather built the national debt clock in 1988.]

[Title card: surfing (n). the practice of paying off debt with more debt]

[Title card: November, 1995
The government runs out of money anyway and shuts down for 3 days.]

[Title card: By 2005, the federal government has spent every penny of the Social Security “trust fund”…just to make its minimum payments.]

[Title card: The US Government spends more on interest than on homeland security, education, and healthcare combined.]

One thought on “Maxed Out”