I’ve largely stopped jogging outdoors in recent years. One reason is that I’ve been concerned for a long time about the air quality. It kind of defeats the purpose of exercising if you’re breathing in car exhaust and coal fumes.*

Arizona’s most recent air quality grade from the American Lung Association is, overwhelmingly, an F, mainly thanks to our cars and reliance on coal for electricity.* 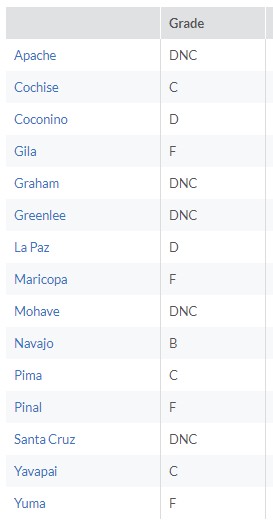 From the American Lung Association’s 2018 Assessment*

We know from a 2013 MIT study that air pollution causes roughly 200,000 premature deaths in the US annually.* This isn’t surprising as we also know that air pollution increases risk of respiratory diseases, lung cancer, and heart disease.

What shocked me years ago as a psychology student was coming across various studies indicating different ways in which air pollution causes cognitive problems. It reduces brain mass, negatively impacts memory, and it’s associated with increased Alzheimer’s incidence.**

Reading this stuff, I would think back to times throughout my teens when I would ride my bicycle a hundred miles a week from Silly Mountain out to Crismon and back, praying that I wouldn’t get stuck at a red light next to that poorly-serviced 1970s station wagon. Or summers when I worked for my mom’s husband in road construction shoveling dirt from curbs while walking around in a black cloud of exhaust from the giant Caterpillar machines. I look back and wonder what permanent cognitive damage I unknowingly inflicted on myself.

Silly Mountain, A Stone’s Throw from My Teenage Home

I think it’s this easy: Kids should be able to ride their bicycles and play outside without an increased risk of physical or cognitive impairment. It’s inexcusable and unconscionable that they don’t have such a guarantee in Arizona in 2018.