I talked to a voter recently who said to me, “I’ve been a Democrat my whole life, but now I went Republican because the Democrats are giving all my money away to the f*cking illegals. Do you have something that stops that?”

Throughout my life in Arizona, I have heard this sentiment a lot. I don’t think the data really back up that undocumented immigrants negatively affect most of us, though. We know that human beings who commit a misdemeanor — not a crime —* by entering the country illegally do contribute about $12 billion to the US economy annually without being eligible to, for example, vote or collect Social Security.*

So, yeah, I’ll probably never know why she believes that all of her money is going to “illegals.” 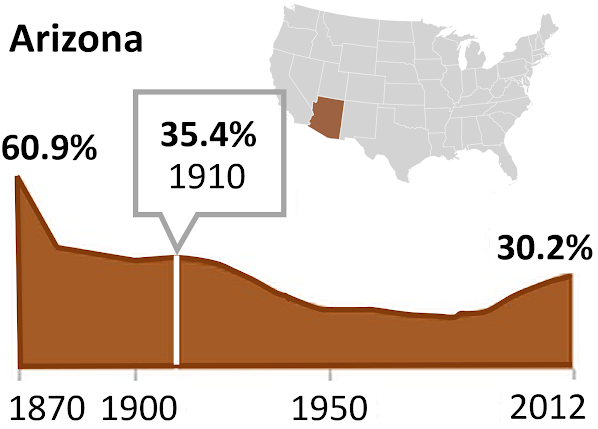 She follows this up by saying, “I love Trump ‘cause he’s stopping them. He’s doing good with my money.”

Immigration’s interesting. We’ve had a border since the country started, and people have pretty much come and gone as they pleased. They’d fulfill seasonal manual labor needs in agriculture or construction and many would then return home. Meanwhile, those that stay commit crimes at much lower rates than the native born.*

I wouldn’t say that any of this means that we need open borders. I do think that we need to stop believing untruths about immigrants, though. Somewhere back there, we all had an immigrant family member. Can you prove that all of your ancestors came here legally? I certainly can’t. Plus, for 99% of us, the only thing we’ve ever done to deserve to be in the country is pay taxes.

If somebody does commit a misdemeanor by entering the country via an unofficial channel, then pays taxes, doesn’t commit other crimes, and just works hard for years and years, why the hell are we trying to punish them? Yeah, I don’t know either. It seems dumb and probably villainous.

Anyway, another person opens his door. Looks to be around my age. Ornate mustache. He’s got the ends of the ‘stache curled up into kind of a spiral. I tell him I’m a precinct committeeperson in his legislative district collecting signatures for some ballot initiatives. He asks what I’ve got. I say that one of them is Invest in Education. He says, “I don’t know what more they want. They’re already getting a 20% pay raise.”

I say, “That just goes into the schools overall. It doesn’t necessarily go directly to teachers.” Last I checked, there also wasn’t a guaranteed funding source, so it’s uncertain that schools or teachers will see any extra money. Invest in Ed doesn’t necessarily go directly to teachers either. It at least gives a funding source, though.*

One thing that’s strange to me about school funding generally is why we make schools scrounge and beg for money. I’ve never heard of a school that was just too well-funded, where students just had too many people caring for them and too many people teaching them. I understand that we need to worry about wasted money, but maybe we could make sure that teachers actually have competitive pay and kids are able to be transported to school and be properly fed before we get too worried about that.

Another person signs all three petitions. We talk about how stupid coal is in terms of health and in terms of jobs. While signing Clean Energy for a Healthy Arizona she says, “I sympathize with the people who work in coal, but we need to retrain them for jobs in clean energy. We need to stop living in the past.” (I always like it when people make my arguments for me.) She said she used to be a Reagan Republican but that her social views have come to supersede her economic views.

It’s an interesting sentiment, and I think it comes from the Republican Party doing a great job of convincing people that it’s better for the economy. In reality, blue states do the same economically overall. If you look at things like unemployment and personal wealth for all 50 states, you find that neither party can really be boastful on these issues. This is worse news for the Republicans, though, because they advertise themselves as the “business lubrication” party. If they’re actually no better for economic flourishing than the Democrats, though, what’s left? To me, mostly just misinformation and collective delusion.