Why “various”? Why not all of them? Well, obviously, not all of the candidates have a legislative trail. Julián Castro was most recently HUD Secretary and Mayor of San Antanio. Pete Buttigieg is mayor of South Bend, Indiana. Andrew Yang founded the nonprofit Venture for America.

I live in Arizona, and so I am especially interested in my own senators. Those two senators currently are Martha McSally and Kyrsten Sinema. They both became senators (Sinema by election and McSally by appointment) in 2019. Therefore, their House records are used for this comparison. END_OF_DOCUMENT_TOKEN_TO_BE_REPLACED

On November 9th, 2016, I woke up to see a mostly red US electoral college map. With a 9-hour time difference between France, where I live, and the West Coast of the US, polls had been closed for nearly 2 hours.

At that moment, my thoughts turned to what I would say to you today. You see, I had originally intended to question the way we think about the clash of civilizations. “Individual rights and aspirations for democracy,” I had intended to say, “must not be thought of as belonging exclusively to certain civilizations, not least because that would mean undermining the validity of universal principles, if ever those civilizations happened to falter.”

I would have preferred that events in my home country not impress upon me so sharply the importance of what I had to say to you today, but they have, and they urge me to make my argument with even greater conviction. The problem that confronts us today is not Oriental or Occidental, Northern or Southern; it concerns all of us what is happening politically in states across the globe today.

Many people in power or hoping to get there are selling citizens on a package deal: “We will protect you from the dangers of the world,” they say, “if you give us power.” What are those dangers according to populist leaders? “Economic competition due to globalization; political parties and governments disconnected from the people; and corrupt values that weaken families and societies,” they say.

Now, to protect people from such great dangers, authority is needed, so the sales pitch goes, the authority of strong leaders, the authority of the state. Only authority can protect. That is the hallmark of populist discourses that seek both to reassure and instill fear, promise justice, and pledge retribution, liberate some and censor others. Now, some analysts say that these discourses emanate from a demand from below. The people are dissatisfied, alienated from political processes. Populist leaders step up and fill the gap left by other political elites.  END_OF_DOCUMENT_TOKEN_TO_BE_REPLACED

In mid-2014, Mark Blumenthal and Ariel Edwards-Levy helpfully published a listing of all then-available data on state voter registration: 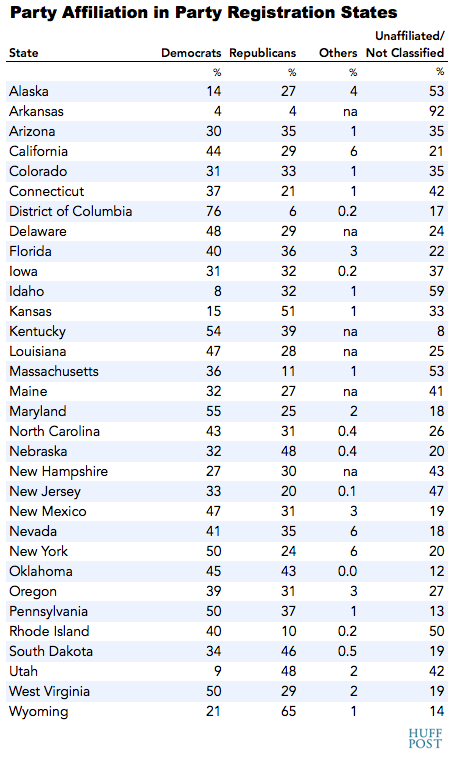 I was curious to what degree this info could be used to retroactively predict the outcome of the 2016 US presidential election.

If you quickly glance at their list, you might wonder where Alabama is. Well, Alabama doesn’t require party registration (as the chart title suggests). The same is true of Mississippi and of Georgia. Due to these omissions, you might think that this undertaking already doesn’t make much sense. There are still 31 states listed, though, so it could still be an interesting exercise.

So, how do we go about figuring out prediction rate? My solution was to first figure out the differences between percentages of registered Republicans and Democrats in each state. For example, the difference here in Arizona is 29.5% Democrat vs 34.8% Republican for a roughly 5 percentage point Republican advantage. Ultimately, Trump won the state by 3.6 percentage points. So, not too bad for Arizona.

I then performed that calculation for all 31 states that require voter registration compared to the Clinton/Trump outcome by state. The results are here: 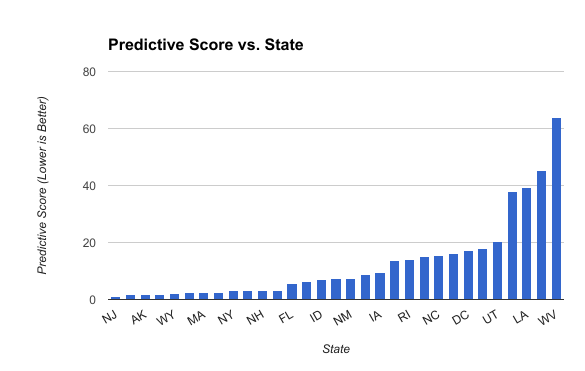 I’m tempted to think that this has something to do with the Dixiecrats.

Of course, it doesn’t help that Louisiana is the only state of those four that requires party registration.

Putting aside for now an explanation for why some of these states have unexpectedly high Democratic registration, what are we left with?

Regardless of that dubious utility, I maintain that the exercise was interesting in itself. Perhaps residents of some of these outlier states will stumble across this info and throw in their two cents for an explanation. Is it that they all have a lot of old timers who never bothered to change registration because cross-party voting isn’t a problem in those states? Is there some other reason?

Keep in mind too that California’s result was 15 percentage points different from expectation based on voter registration. How come? I don’t know. Feel free to chime in if you think you know.